Welcome to Fourth World Radio Internet headquarters. I thank you for visiting and hope you enjoy your stay.

My name is Geoff Giordano. I hail from the United States and currently reside on the East Coast. I am a singer, songwriter, multi-instrumentalist and author. Fourth World Radio is my personal music and literary endeavor. The music I have recorded thus far has been written, arranged, recorded and produced by me and with the help of a few very talented friends along the way. This website is here to share this music, ideas, words, images, visions, and concepts behind my work. 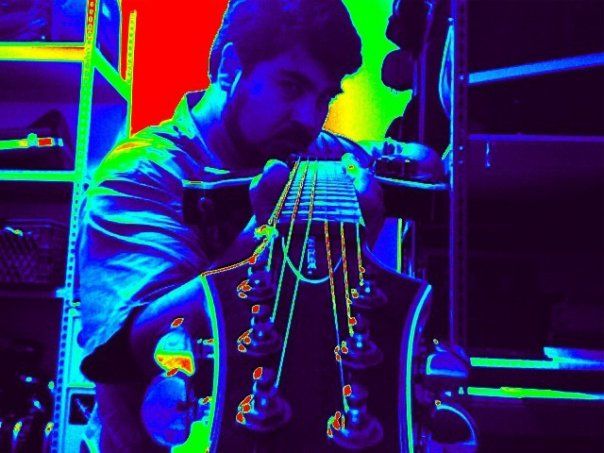 The idea behind the name Fourth World Radio came to me from several different directions. There are several reasons why I chose the name, which I will expand upon in both my blog and soon-to-be-finished short story, Transmission: One, which is a meta-journalistic piece that presents a fictitious story about the "band" it's origins and it's ideas. But to explain the meaning behind the name, in short, is this: Music from The Wilderness. This can be taken in a very literal way, as in, imagining an old radio tower transmitting from some remote part of the world were no man has beer been, and it's signal an attempt to reproduce the sounds of nature, life and it's mysteries, an attempt for man to assimilate and make music inspired only by the sounds he hears in this wilderness (Sounds like THESE…) ; or perhaps this isolated station's frequency might tell tales of adventure through song, music, words, sounds, and rhythm. It can also be taken in a more Joseph Campbellian fashion, the wilderness being the unknown and the treacherous terrain our hero must cross not once, but twice: Once to reach his goal, and to retrieve the medicine that will save his tribe, his people; and Twice to return it to them. This is the music of that wilderness.

My intention and goal in writing music is not to produce hits, or fashionable sounds per-se. I have always wanted to make music that would satisfy the hearts of men and women who were hungry for adventure, hungry for something new and challenging, hungry for hope and salvation from the ordinary. I try to incorporate the idea of adventure into this music. The lyrics are vague themes, nonlinear and peripheral storytelling, that both tell a story, or part of a story, or beg the listener to make their own decisions as to what the song is about. I will only write a song if I can think of a story, something fantastic and unbelievable. I avoid getting nakedly personal or political in songs, but I believe that any emotions or ideals that I wish to express come through the story, but in a way that someone else can get out of it what they want, without my desire to express getting in the way. This is my goal, at least.

I try to incorporate the idea of adventure in the music itself. In terms of sounds, genres, arrangements, and even mixing. The music itself I try to find something unique. Of course I have my influences, but really the music has to sound to me like it came from an alternate universe. I dream music, although never have been able to transfer directly, but when I hear and tweak a song just the right way, I know that that is how it is supposed to sound like from dreams. I always try to find some way of playing it, some instrumental or vocal layer that brings the song from to a third dimension. I want it to change the physics of the room. This is possible. More on that later.

I have been often told that my music and the arrangements are very "cinematic". I consider many of my songs short audio-films, or perhaps soundtracks to short films, or tales told and written, journeys taken, visions beholden. I am a lover of cinema and literature, and I apply my appreciation for these mediums into the songs I write. I use sound effects, sounds of nature and industry. I use any effect I can to create the right atmosphere. My advice on each record, doctor's orders: For best results, please listen to this album with headphones and vice of choice. at high speeds, or alone in nature.

I have many influences and love most genres of music. This is another adventure for me. It is true that the influxnces of my personally favorite bands and genres rise to the top, and are sometimes quite obvious, but many times, the ideas I have come from a cross-pollination of very diverse musical genres and bands. I believe in a Marvel Comics/Hall of Justice type of songwriting. When stuck on a part of a song that has very strong 80's yacht-rock vibe, I ask what would Sonic Youth do here? What would happen if Steely Dan and Soundgarden wrote a song together? Def Leppard and Weather Report? Black Sabbath and Fela Kuti? U2 and Jamiroquai? Neil Young and Nile Rogers? You get the point. And I like to think of the idea of "World Music" which basically means, "all other music, culturally, apart from popular music", popular music including jazz, country, rock, electro, etc. But TRUE world music would incorporate all of these. And not is some corny hip-hop/country crossover type of thing, but music tat incorporates many different types of music, deep in the fabric of the music itself. I like to give each song it's each unique and strange DNA, and you may find jazz and metal to be not so far apart on the double-helix.

Adventure, Beauty, Inspiration, Fear, Awe, Transcendence… these are my goals. Have I achieved them? I guess that would be a subjective decision. I can't say for sure. I'm still grasping and still in complete awe of music, sound, color, stories, and words. The art creates itself in a way. It already exists, there trapped in the dark, the silence, the chunk of alabaster, or the restless mind. It is there for everyone, you just have to know how to carve it out. I am still simply fascinated by both the spiritual and the scientific aspects of music. It's power to heal, it's power to change, it's power to inspire dance, tears, laughter, revolution, lust, love, sex, to name just a few results (may vary).

I have recorded one EP called Aperture (available soon on iTunes/Amazon/CDBaby), which I released recently. I am proud of this album, although I made a few rookie mistakes in recording and mixing… I was basically learning Pro-Tools as I went along, and some things got over-EQ'd or under-mixed. I had a lot going on and a lot to put into each song, so some things may seem a bit cluttered, but I cannot seem to do things in an uncomplicated way and didn't have the heart to cut things out (bad mixing trait, I know). I intend to re-mix this in the near future, after my current endeavor is finished, and mix this in surround sound. I think this may help it breathe a little easier. Nevertheless, I am proud of it and you can listen to tracks now on the AUDIO page.

Currently I am working on two separate records. One called Transmission: One, which is a parallel release with the book of the same name, mentioned above. This one has a more tropical, jazzier, ancient-aliens-music from the future kinda vibe. The second is called Ultrafauna, which was written mostly on acoustic guitar, a little mellower and on the rock/country/folk end of things, with a touch of world and jazz, and thematically deals with concepts of evolution, love, and survival.

I thank you for reading, and hope I've piqued your curiosity to continue (If you haven't already, and if you've come this far, you're the kind of person we're looking for… I can be a little long winded, I know, and patient people are hard to come by these days). So, without further due, I welcome you to the world of Fourth World Radio… Cheers!

Ladies, Gentlemen, And Otherwise… The GREATEST SHOW ON EARTH AT THE VERY LEAST!!!